Get fresh music recommendations delivered to your inbox every Friday.
We've updated our Terms of Use. You can review the changes here.

by Juan Calderon and Stephanie Lamprea 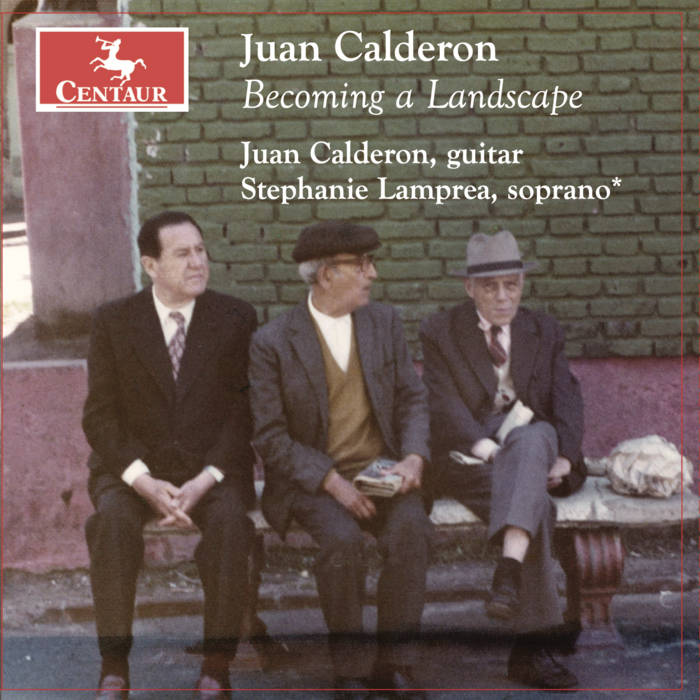 Program Notes
In 2014, New York-based Colombian guitarist Nilko Andreas requested a song for soprano and guitar inspired by traditional Colombian themes.
Searching for suitable texts, I recalled a three-volume anthology of Colombian poetry spanning the colonial period to the 20th century, called Antología de la poesía colombiana, which I had discovered in a bookstore in Miami around 2006. The poem “El Paisaje” by Octavio Gamboa possessed a suitable length and a theme I found appealing in a personal way. It speaks about an old man who leaves behind his memories of love and friendship and sits on a chair looking at the clouds until, in the poet’s words, he “slowly becomes a landscape,” thus joining the “secret process of the afternoon.”
I shelved this song until December 2017 when I had the opportunity to record it as the tail end to a session in Bogotá with local classical musicians. The mood in the studio was buoyant and the idea for a song cycle was brought up. I immediately thought it was worth pursuing and made a mental note to start working on what became Six Songs for Guitar and Soprano as soon as I returned to New York.
There is a park in Cali called El Parque de los Poetas (Poets Park) where a bronze statue of Gamboa sits casually conversing with other Colombian literary luminaries. This celebrity status did not mean his books were available anywhere in the city. Thankfully, an internet search yielded a website maintained by one of his descendants and dedicated to the family’s literary legacy (www.cuevas-mohr.com/octavio-gamboa-tobon/). Reading further in his poetry, I realized there is a rhythm that makes the process of setting it to music a rewarding challenge. His story is interesting as well. He was a journalist/fisherman who came from an extended line of poets and literary critics. Both parents were poets, and, according to the poet María Mercedes Carranza, he was active in the literary movement termed Los Cuadernícolas (something like, “the cave-bookers,” a play between caveman and notebook). Former president Belisario Betancourt, Gamboa’s classmate at Cauca University, recalled that during their college days they formed a “somewhat pretentious” group proclaiming themselves the Group of the Six, and taught themselves German in order to read Rilke and Kafka in their original language.

The chosen texts appealed to me because I relate to them at an existential level. They follow a general theme touching upon different shades of solitude throughout our lifetime and a relationship to sound and silence. I tried to make the vocal lines accommodate the text as organically as possible, which sometimes led me to write in a kind of melodic recitative style. I brought in ideas for guitar to fit the character of the poetry. According to the research done by Hugo Cuevas-Mohr, Gamboa was a huge fan of classical music, especially Beethoven, so in the end it seems we had a spiritual connection through the meeting of two art forms.
Five Guitar Pieces I comprise the first notated music for the guitar that I wrote at the beginning of my college days. In my teens I had improvised and memorized original music for the acoustic guitar, but the period from 2003 to 2006 is when I seriously began to give form to my improvisations on staff paper. Some of the ideas are clumsily shaped or derivative, yet they possess a zeal and sincerity of youth that tends to disappear somewhat as we get older and become better craftsmen. Among these, Study for Atonal Chord Progressions became better known among my contemporaries because I tapped into a more personal language by intuitively absorbing some of the sound world of composers at the edge of standard tonality.
I wanted to contrast this set of early music with the more recent Five Guitar Pieces II, written in 2017 and 2018. They came from various sketches gathered from ideas after teaching a particularly difficult technique or as a response to studies or repertoire I’m practicing at a given moment. They expand on techniques such as slurs and double stops. Compared with the first set of guitar pieces, there is a greater degree of chromaticism and concern with symmetry of form.
Coney Island Bound on a Holiday was written at a time when I went to the beach often. The title comes from the piece’s carousel feel and the amusement park there. Slur Etude is an endurance challenge for the left hand, in which one has to maintain a melody over a background of unrelenting slurs meant to develop strength and independence of the left hand. The Return is a dreamy lullaby song, consisting of an ascending broken chord that strives constantly upwards. Passarale is a mix between a chorale and a passacaglia, and it has a gloomy, funereal mood using octaves as a melodic device. It features wide left hand stretches to achieve the effect of extreme contrast of high and low registers. K-town Ragtime began as an improvisation published on social media. The harmony reminds me of Korean soap opera music. Improvisation V was done at the very end of the recording session, as I thought it would be fitting to showcase a procedure that is integral to my compositional practice.

My musical language has been influenced by my teaching practice as well as the personal relationship I’ve developed with the guitar as an improviser. I dedicate two to three hours to composing and playing everyday and I spend an hour on each aspect of a particular project such as sketching ideas, notation and transferring to a publishing software. ... more